We often hear that Millennials are attached to their phones and advertising on mobile and digital is the only way to reach them effectively. But we wanted to know how Millennials really spend their time with media. Westwood One turned to Nielsen, Edison Research, and The Advertising Research Foundation to check the facts on these assumptions.

#1. Myth: Millennials spend all their time on smartphones.

Contrary to popular belief, smartphones don’t eat up 100% of media time spent for Millennials. In fact, TV and radio, often referred to as “traditional media,” make up an astounding 67% of the media time spent.

#2. Myth: If you want mass reach with Millennials, go with television.

Radio is America’s number one mass reach medium with 9 out of 10 Millennials reached each week. One out of four Millennials are NOT reached by ad-supported television. 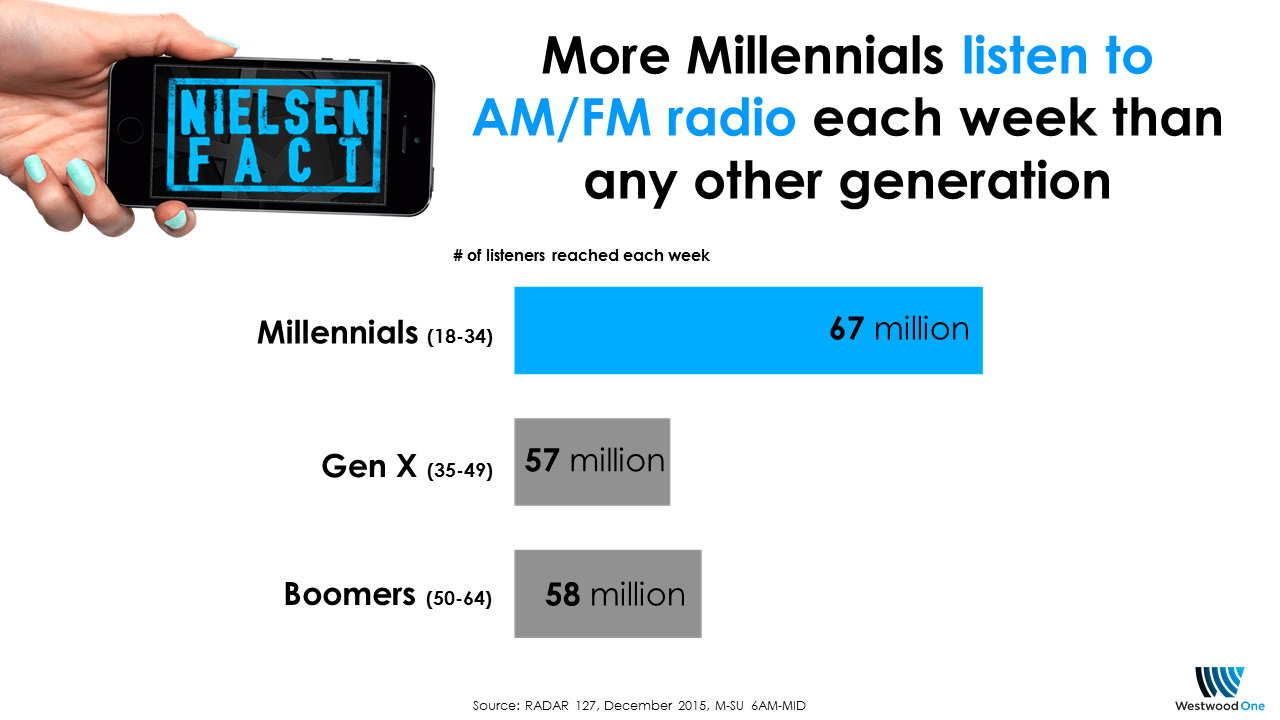 Not only is radio America’s number one mass reach medium for Millennials, but more Millennials listen to AM/FM radio each week than any other generation.

#5. Myth: In the car, the number one thing Millennials do is stream online radio on their smartphones.

AM/FM radio dominates in-car audio listening among Millennials with a massive 67% audience share. AM/FM radio is 22x bigger than Pandora and 34x bigger than Spotify in the car.

#6. Myth: The number one way Millennials learn about new music is from streaming and social media. 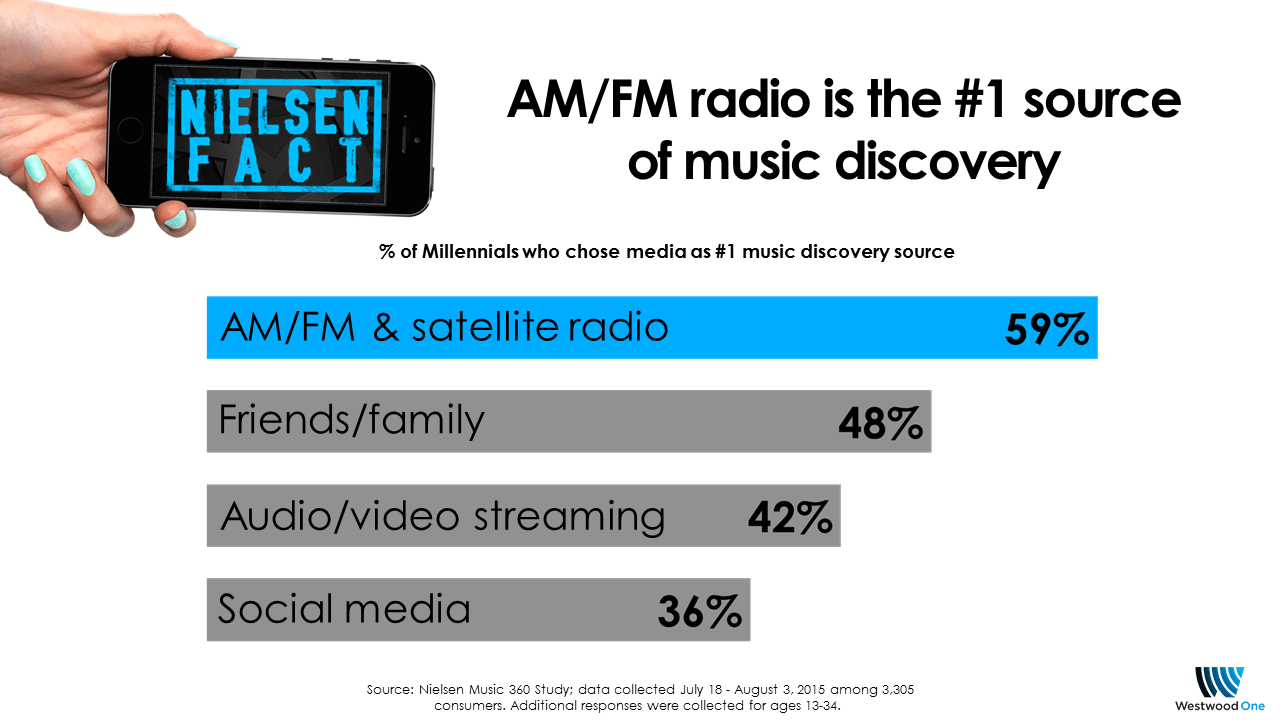 More than half of Millennials choose AM/FM and satellite radio as their number one source of discovering new music. While streaming audio and video put up strong numbers for music discovery, they are still far behind radio and friends and family, sitting in third place.

#8. Myth: The optimal media plan to reach Millennials: put all your money into mobile and social. 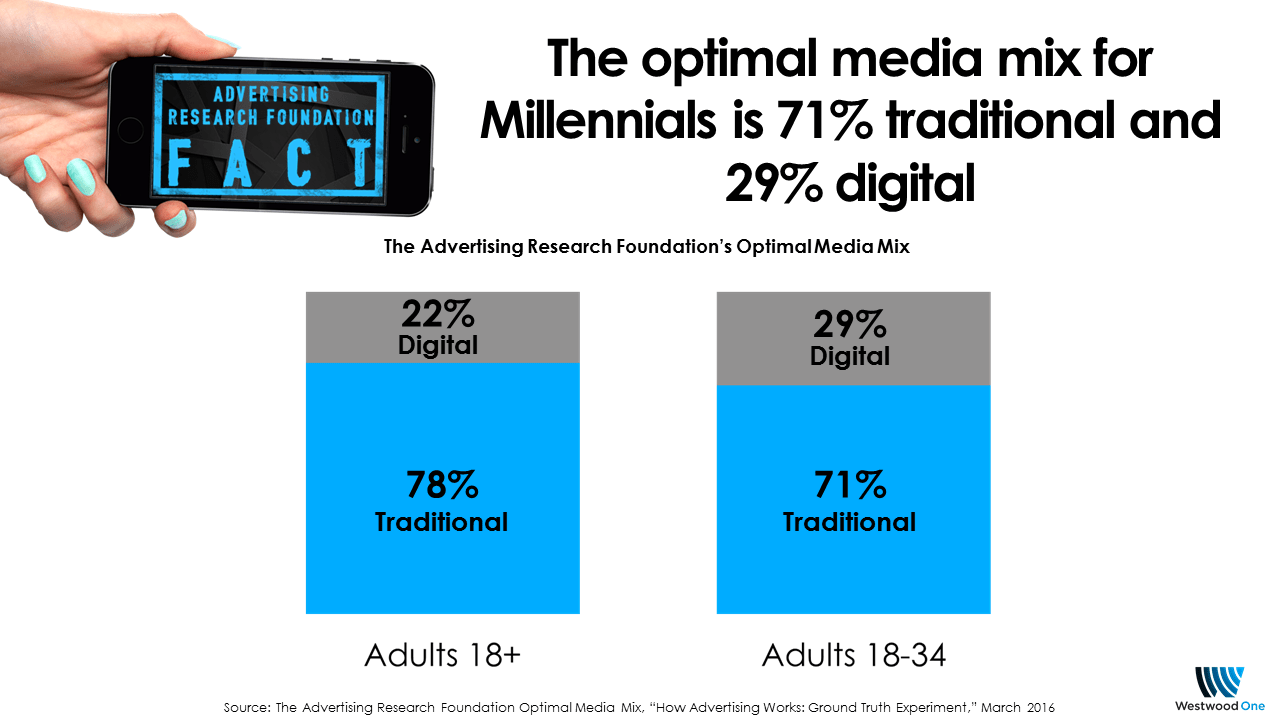 In order to reach Millennials, traditional media should still get the lion’s share of any media, according to the Advertising Research Foundation’s recently released “How Advertising Works” recommendation. While a Millennial media plan should have more money in digital than a plan for all adults 18+, advertisers should not put all of their Millennial money in the digital basket.

Millennials aren’t much different than the general population. Sure, they spend more time on their phones checking Facebook, Instagram, and Snapchat, but they still like their traditional media.

In fact, Millennials are the generation that listen to AM/FM radio the most. According to Nielsen, nine out of 10 Millennials tune in to radio every week. Radio is and continues to be the centerpiece of audio in America and is essential to any marketing plan to reach Millennials.