5 Strategies For A Healthy Media Plan

I was channel-surfing the other day and came across a show where the host was giving tips on how to live a healthier life via a commitment to a balanced diet. To paraphrase, her advice was:

3. Strive for a balanced diet.

These same balanced dieting principles could also apply to any 2016 media plan.

A good meal is composed of several courses, just like a good media mix. Overdoing it in one medium, no matter how effective the medium, is not good.

The chart from the Advertising Research Foundation’s “How Advertising Works” study shows the diminishing ROI impact of spending too much in digital. The more digital spend, the lower the ROI. Too much digital investment can actually cause sales to decline!

This is good news for radio industry, showing that it’s important to continue to have radio in the media mix even while investigating digital platforms. 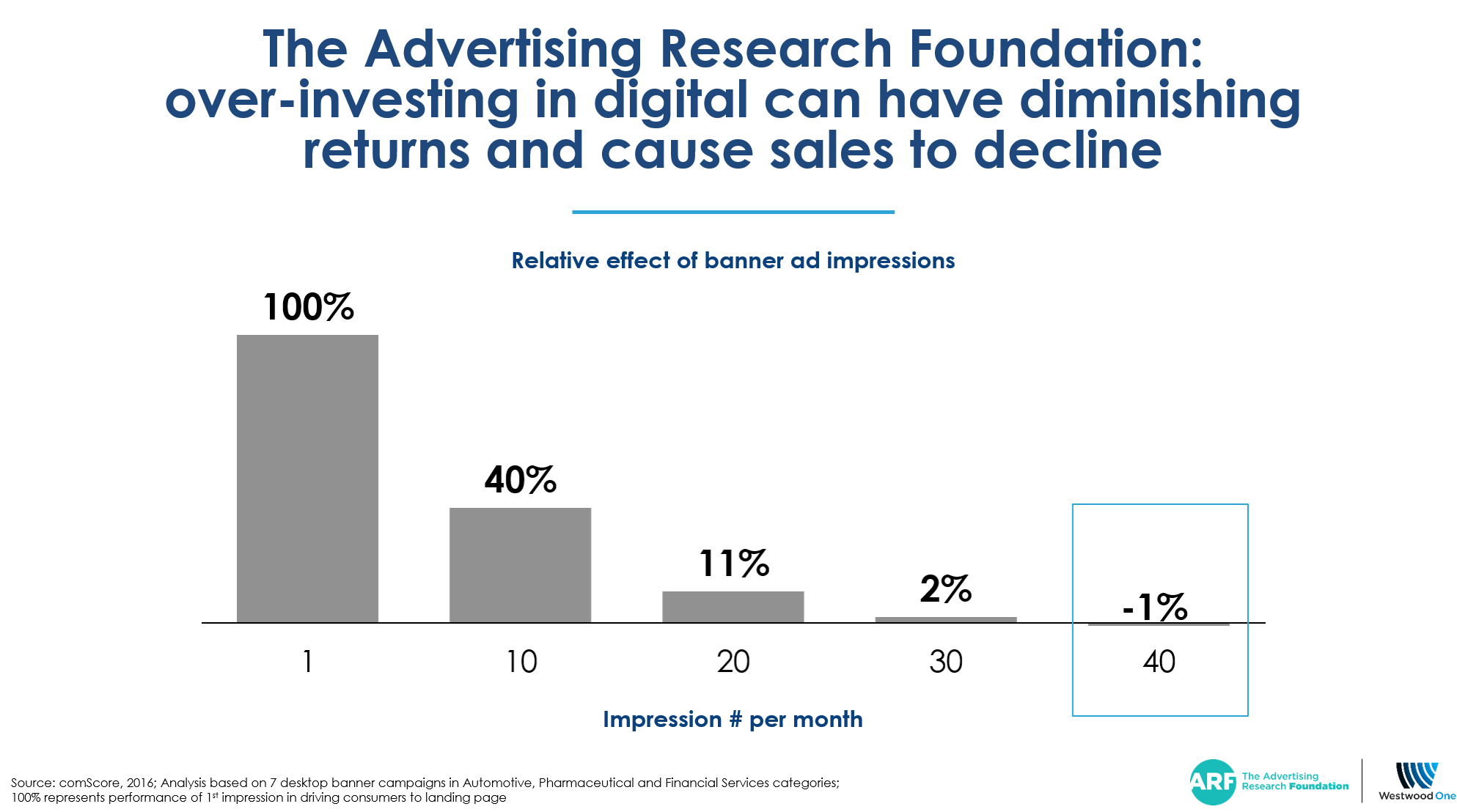 A buffet of different media — radio, TV, digital, etcetera — is more effective than a full plate of one medium.

Consumer purchases never stop, nor should advertising. If advertising pauses, the hiatus should be as short as possible.

Erwin Ephron, the father of modern media planning, coined the term “recency.” He explained it is “the common sense idea that advertising is most effective when it reminds people about brands they know, when they happen to need the product.

Radio is a particularly effective tool for advertisers, as it provides mass reach, in order to get as many people in the market for a product or service at any given time.Radio also helps advertisers reach consumers close to the point of purchase, often when they are in their cars running errands or commuting.

Both traditional and digital media bring unique attributes to an advertising campaign. Mobile, search, social, radio, TV, out of home, and print contribute reach and frequency and work well together.

“Advertisers are erring by shifting money among media platforms rather than spending more to spread it more widely, the group has concluded, based on what ARF CEO Gayle Fuguitt called the most extensive industry study in more than a quarter century.”

If the Internet was one of the five food groups, it should only account for 20-30% of media calories, according to the Advertising Research Foundation.  For a broad target demographic of persons 18+, the ARF recommends a 78% traditional, 22% digital mix. For an 18-34 Millennial target, the recommendation is 71% traditional media and 29% digital. 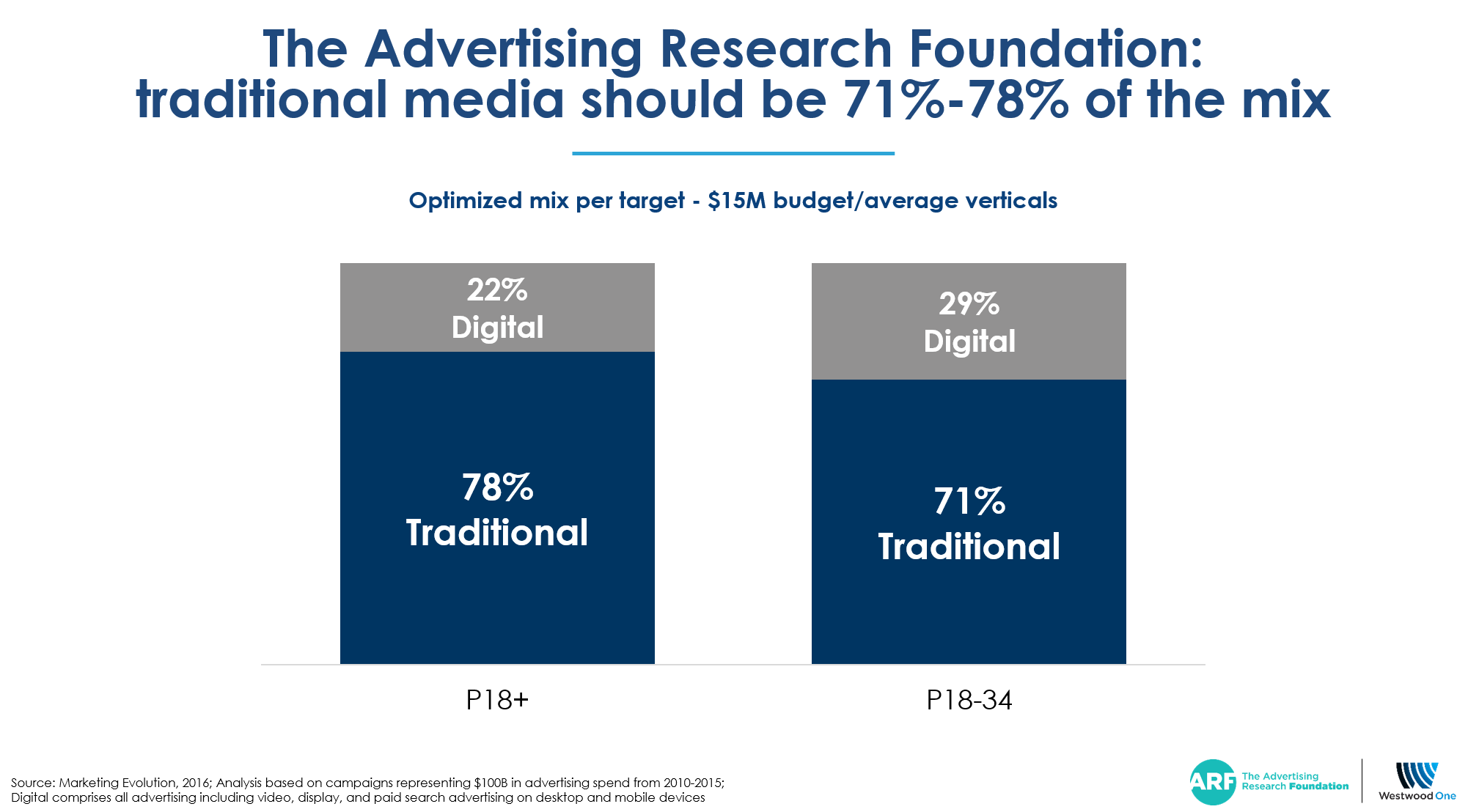 4. Take smaller portions — put a little bit of your budget across media.

The Advertising Research Foundation “How Advertising Works” study showed that the more media used, the greater the payback/ROI. 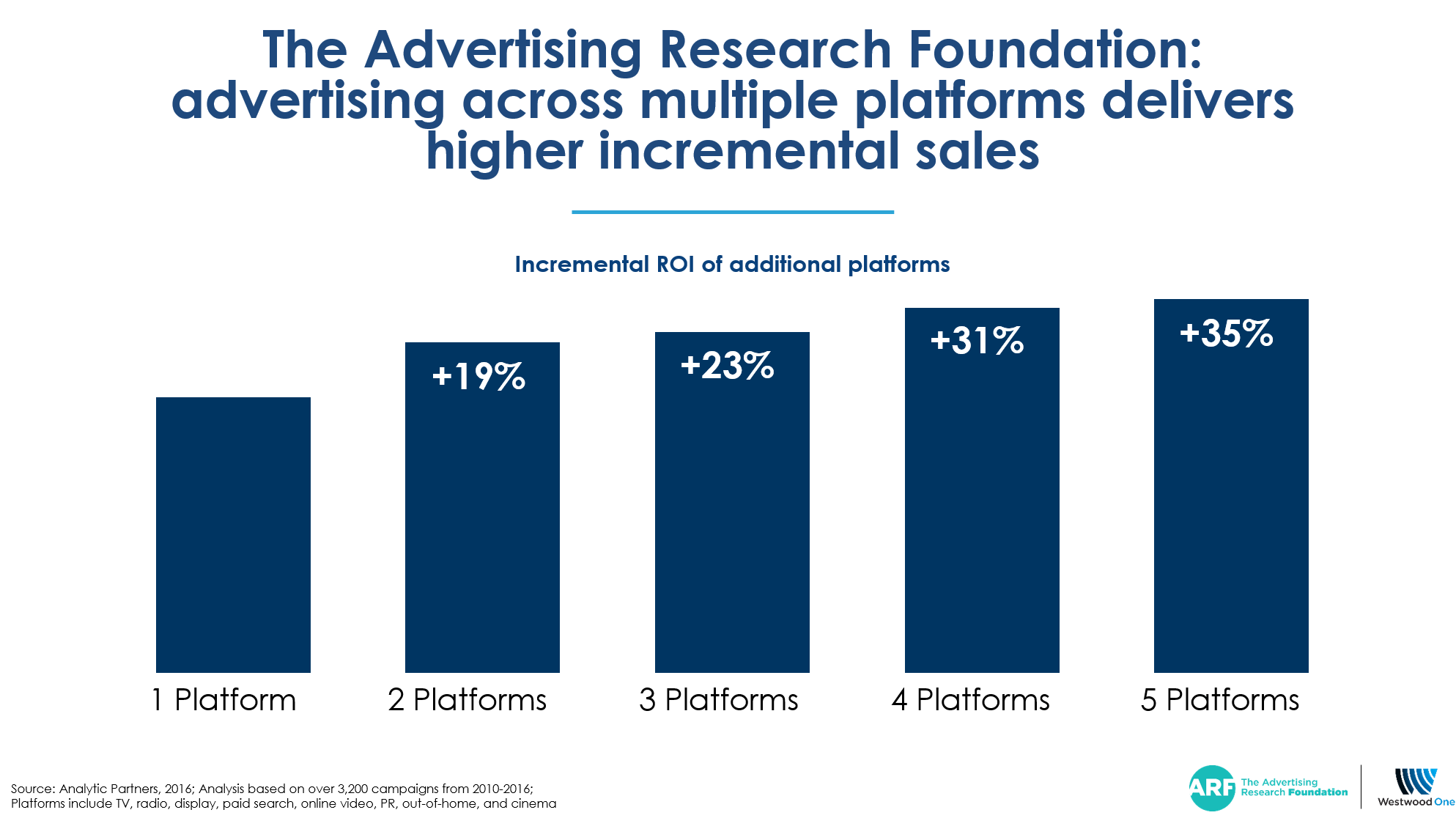 Don’t be digitally “overserved” with your media budget. Digital drunkenness is approaching epidemic proportions and should be avoided at all costs.

The Advertising Research Foundation study shows a balanced approach of traditional and digital media will produce the best results.

Bob McCurdy is the former President of Katz Marketing Solutions and is the founder of Uppingthevolume, a leading sales coach for media sellers. Bob can be reached at bob@uppingthevolume.com.

Pierre Bouvard is the Chief Insights Officer of Westwood One | Cumulus. Follow him on Twitter or LinkedIn.