You could not escape the blaring headlines of the last few weeks:

Yes, There Is a War on Advertising. Now What? (Advertising Age)

On Wednesday, September 16, Apple released its latest operating system, iOS9, for the iPhone. The new release allows extensions for ad-blocking in the Safari browser. Ad-blocking software apps soared to the top of the iTunes app store.

Ad Age reports advertisers are “fighting back against blocking software with rival technology that ‘blocks the blockers and gets around the blockers.’” But there could be a downside if advertisers adopt this tactic. “We don’t want to anger consumers,” says Dan Jaffe of the Association of National Advertisers. “Everybody needs to move carefully.”

The real issue? Online ads need to get better

James Avery, CEO of Adzerk, writes in AdExchanger: “to slow the adoption of ad blocking and make the Internet a better place, we need to make advertising better…Users install ad blockers because ads are crappy, there are too many of them, they impact computer performance and consumers feel like their privacy has been violated.”

Who is to blame? Advertisers/publishers or the consumer? Casper von Wrede from Kittysplit, wryly observes, “If you milk the cow so hard, it kicks you in the face; don’t blame the cow.”

To understand the real magnitude of ad-blocking, we turned to comScore, the leader in digital media measurement, and the technology company PageFair, who partnered with Adobe to release the 2015 Ad Blocking Report. Here are three headlines from studies both firms have released:

1. Globally, ad-blocking is soaring; in the U.S. comScore estimates 9% block ads; PageFair reports 16% block ads. In countries like France and Germany, comScore reports one out of four use ad-blocking. Could the U.S. expect to see ad-blocking levels of that magnitude?

PageFair reports ad-blocking in the United States grew 48% during the past year, increasing to 45 million monthly active users during Q2 2015. PageFair calculates ad-block usage in the United States resulted in an estimated $5.8B in blocked revenue during 2014. It is expected to cost $10.7B in 2015 and $20.3B in 2016. 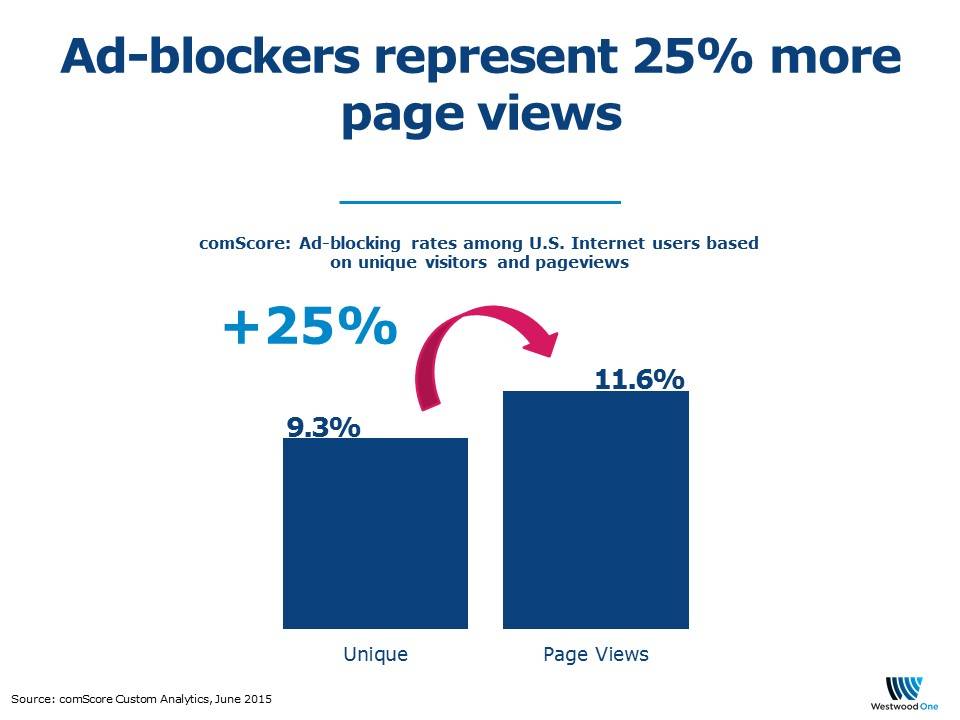 Advertisers can reach online ad-blockers with mass reach media like AM/FM.  With 9% to 16% of online Americans ad-blocking, and those rate are expected to grow, media plans need help to “plug the hole” of missed consumers.

AM/FM is the “last media standing” when it comes to mobile mass reach and can help marketers reach consumers who ad-block online advertising.

Randall Rothenberg, president and CEO of the Internet Advertising Bureau, tells Advertising Age:  “We are mistreating our most valuable asset — our consumers…until we commit to the cause of ever-improving user experiences, advertisers and media will be at risk.”