Advertising Beyond The New York Bubble: How America Commutes And What It Means For Media Plans

In the wake of the recent Presidential election, advertising agencies received what The Wall Street Journal calls a “stark realization.” How in touch are New York media strategists with the majority of the American audience?

Saturday Night Live lampooned New Yorkers disconnect with the rest of the U.S. in the skit “The Bubble.”

“The Bubble is a planned community of like-minded thinkers; and no one else.”

Colin Kinsella, CEO of Havas Media North America, told the recent Radio Ink Forecast Conference: “The biggest risk for radio is the 26-year-old planner who lives in New York or Chicago and does not commute by car and does not listen to radio and thus does not think anyone else listens to radio.”

How do Americans commute to work?
According to the U.S. Census American Community Survey, 86% of American workers commute by car. 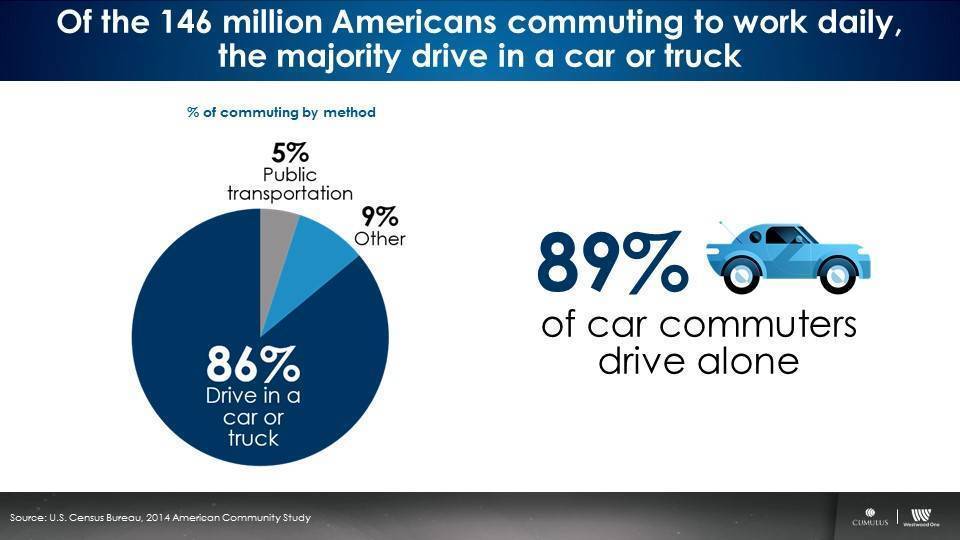 Census data reveal the majority of those in-car commuters are commuting alone. No wonder AM/FM radio is the “king of the road,” dominating in-car audio consumption, according to Edison Research.

Edison’s Q3 2016 “Share of Ear” study reveals 70% of all in-car audio time spent goes to AM/FM. Commercial-free SiriusXM has a 13% share, followed by the time people spend with their personal music at 10%.

Despite all the talk of the connected car, little if any “digital audio” listening occurs in the car. Combined, podcasting and streaming represent a tiny 4% share of in-car audio time spent.

How does commuting vary by market?
In America’s largest metros, the vast majority of workers commute by car. Except for one market: New York City.

New York, home to many of America’s media planners, is the only market where the majority of workers commute by public transportation.

You buy how you drive
Media decision makers who commute by car are 75% more likely to have radio in their media plans versus their public transit colleagues, according to a study of 423 advertising decision makers.

Agencies and big brands like P&G are emphasizing mass reach platforms in their media plans to grow revenue. P&G’s Chief Marketing Officer Marc Pritchard recently asked: “What is the best way to get the most reach but also the right precision?”

Step outside the New York bubble
AM/FM radio is America’s number one mass reach medium, targeting the diversity of America. Eighty-six percent of American workers commute by car. AM/FM has a stunning 70% share of all audio time spent in the car. AM/FM is the soundtrack of the American worker.

Pierre Bouvard is Chief Insights Officer of Cumulus | Westwood One.

What do you think? We’d love to hear from you at CorpMarketing@westwoodone.com.