While still a powerful medium for advertisers, it’s getting harder to find the eyeballs on TV these days. Below are six reasons why:

1. Total TV audiences are down 7%. In a recent research note, media analysts MoffettNathanson said 18-49 primetime ratings were down 7% January 2015 versus January 2016. Tuning to the broadcast networks (ABC, CBS, NBC, Fox, etc.) was down even more – 11%. Interestingly, during the same period, Nielsen reports radio listening levels are up 8% among 25-54s and up 10% among Millennials.

2. Millennial TV viewing is falling like a rock. While overall TV viewing is down, erosion among Millennials is much more severe. As this chart from Wall Street analysts MoffettNathanson reveals, TV usage among young viewers has been in negative territory since early in 2014. 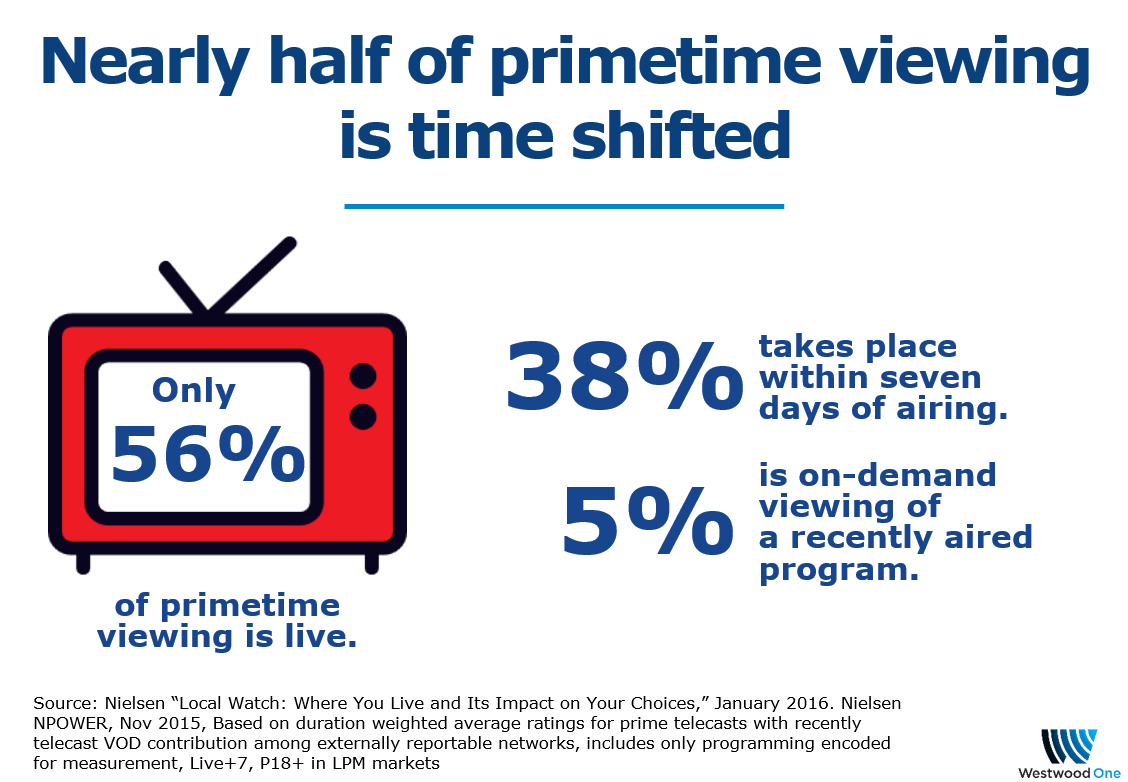 4. Netflix is responsible for 50% of TV viewing erosion. Just last week, MoffettNathanson crunched Netflix’s reported tuning hours and concluded that half of U.S. TV’s viewing drop is due to Netflix.

“We calculate that domestic Netflix usage represented just under 6% of total traditional TV viewing in 2015 … Netflix sourced 50% of the measured decline…As a result, we forecast that Netflix’s U.S. total streaming hours relative to traditional TV will steadily rise to the low double-digit range over the next four years, and will continue to represent half of the declines in traditional TV viewing.”

5. Heavy streaming usage among young demographics explains the sharp drop in TV viewing. Half of U.S. homes have Netflix, Hulu, or Amazon Instant Video, according to Nielsen. Among upscale homes with $75,000+ incomes, streaming subscriptions soar to nearly two-thirds. The younger the consumer, the more likely the home has Netflix, Amazon, or Hulu. Seventy-four percent of homes headed by Millennials 35 and younger subscribe to one of the video streaming services.

6. One of 5 American homes have a smart TV that connects directly to the Internet, bypassing traditional TV ads. Smart TV prevalence is even higher in upscale homes, Nielsen reports. 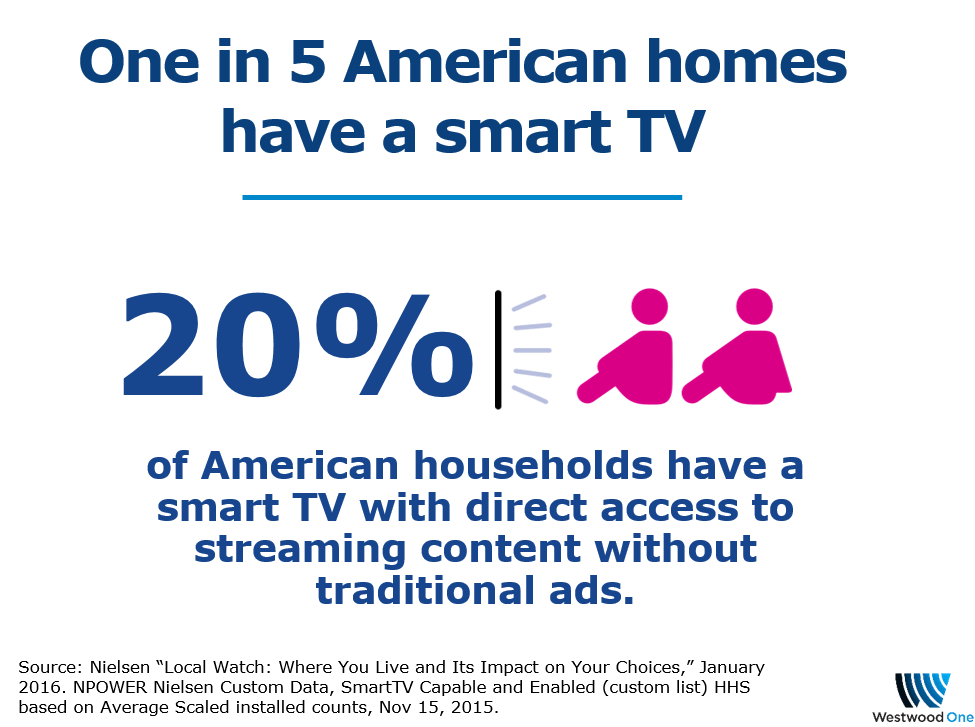 How radio can make your TV better

Despite these six challenges, TV is still an excellent ad medium. There is a way to improve TV impact: adding radio to the media plan boosts exposure among consumers who are only lightly exposed to a TV campaign. 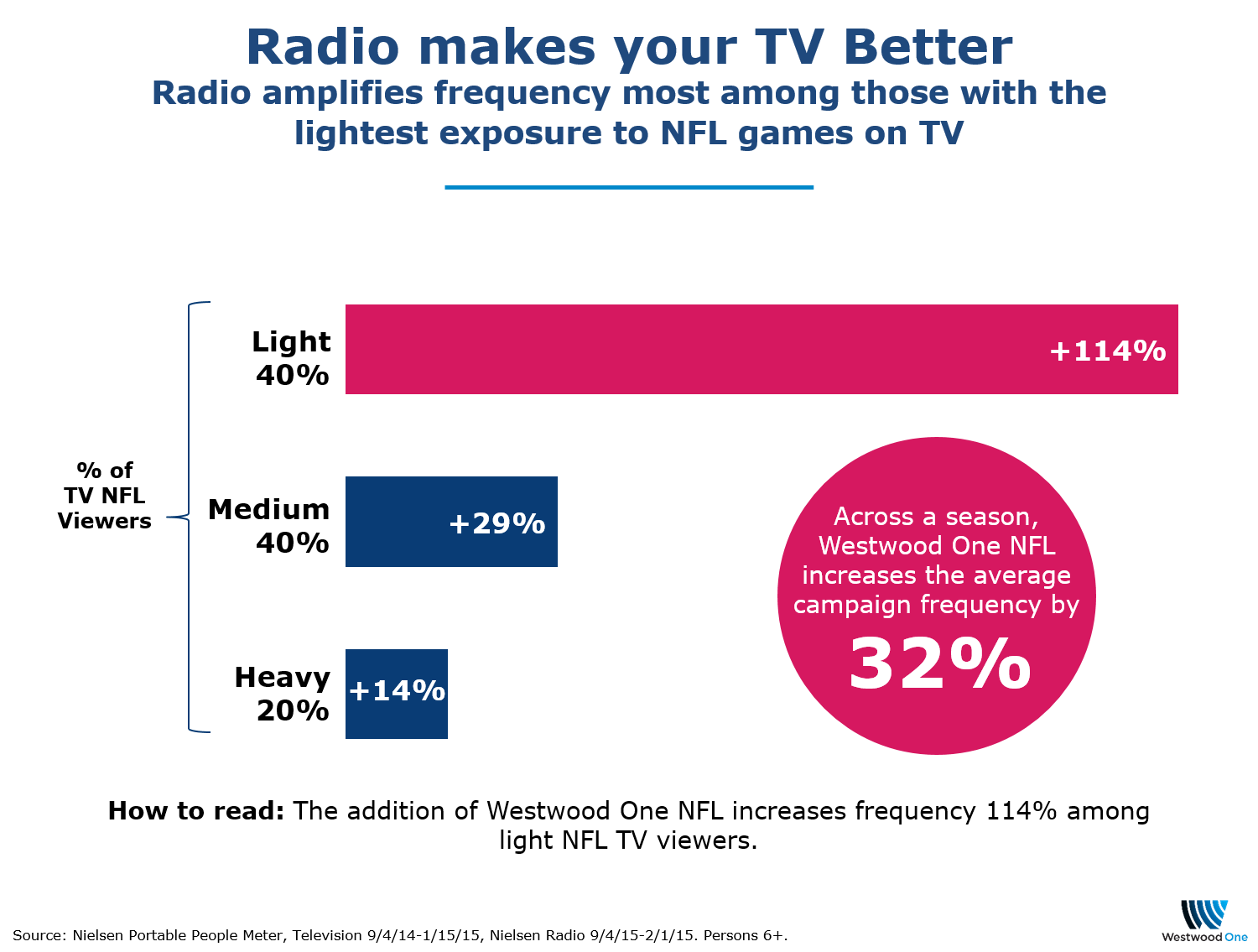 In summary, TV time spent and reach are down. Younger and upscale consumers are spending more time with streaming services like Netflix, Amazon Prime, and Hulu. Radio can compensate for the loss of TV tuning and reach by amplifying impact among light and medium TV viewers.