Test Your Knowledge: Perception And Reality Of American Audio Audiences

The U.S. radio industry wanted to understand the perceived and actual audience size of AM/FM and streaming services. We turned to the leaders in advertiser sentiment (Advertiser Perceptions), online audio usage (Edison Research’s “Share of Ear” Study), and media measurement (Nielsen) to conduct a first-of-a-kind study.

Test your knowledge with these four questions and see how you compare with America’s advertisers.

1. What % of Americans are reached by AM/FM radio?

Perception: Agencies and advertisers think 64% of Americans are reached by AM/FM radio, according to an Advertiser Perceptions study conducted in May 2015.

Reality: According to Nielsen, 93% of Americans are reached by AM/FM radio. (Total Audience Report, Q1 2015) 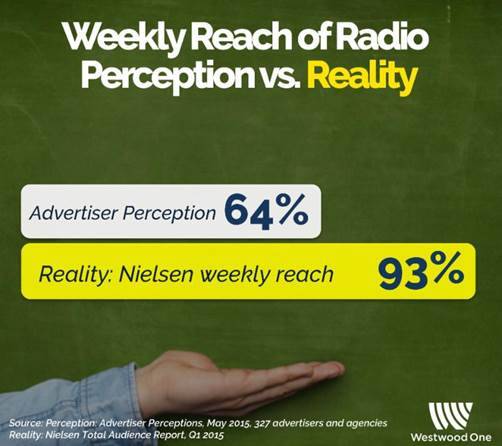 Lew Dickey, CEO of Cumulus and Westwood One concludes:”Advertisers and agencies drastically underestimate the reach of AM/FM radio. This study is the first conclusive evidence of the major gap in actual and imagined performance of AM/FM and streaming outlets.”

2. What % of America’s coveted Millennials (18-34) are reached by television and AM/FM radio?

Bob Pittman, Chairman and CEO of iHeartMedia Inc., says:”The most recent Nielsen Total Audience Report showed that radio is now the number one reach medium, surpassing TV with total audience and Millennials by an even greater margin. This research makes it clear that while TV and new forms of media may get more attention, they don’t come near the reach of radio; radio is truly the mass reach mobile media.”

3. What is the U.S. audience share of AM/FM radio compared to streaming services?

Perception: Advertisers and agencies think the audience share of AM/FM radio is nearly the same as streaming, according to Advertiser Perceptions. 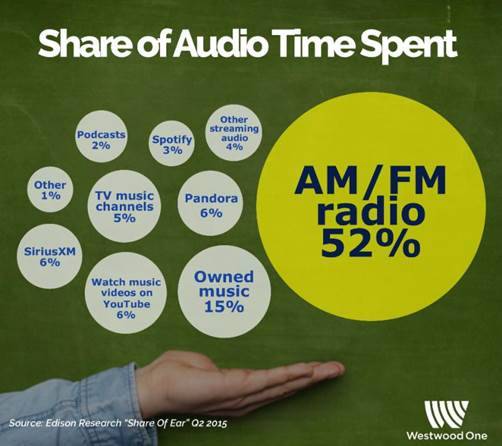 4. What % of Americans are reached by Pandora and Spotify?

Perception: Advertisers and agencies think Pandora and Spotify reach 27% and 20% of Americans respectively, according to Advertiser Perceptions. 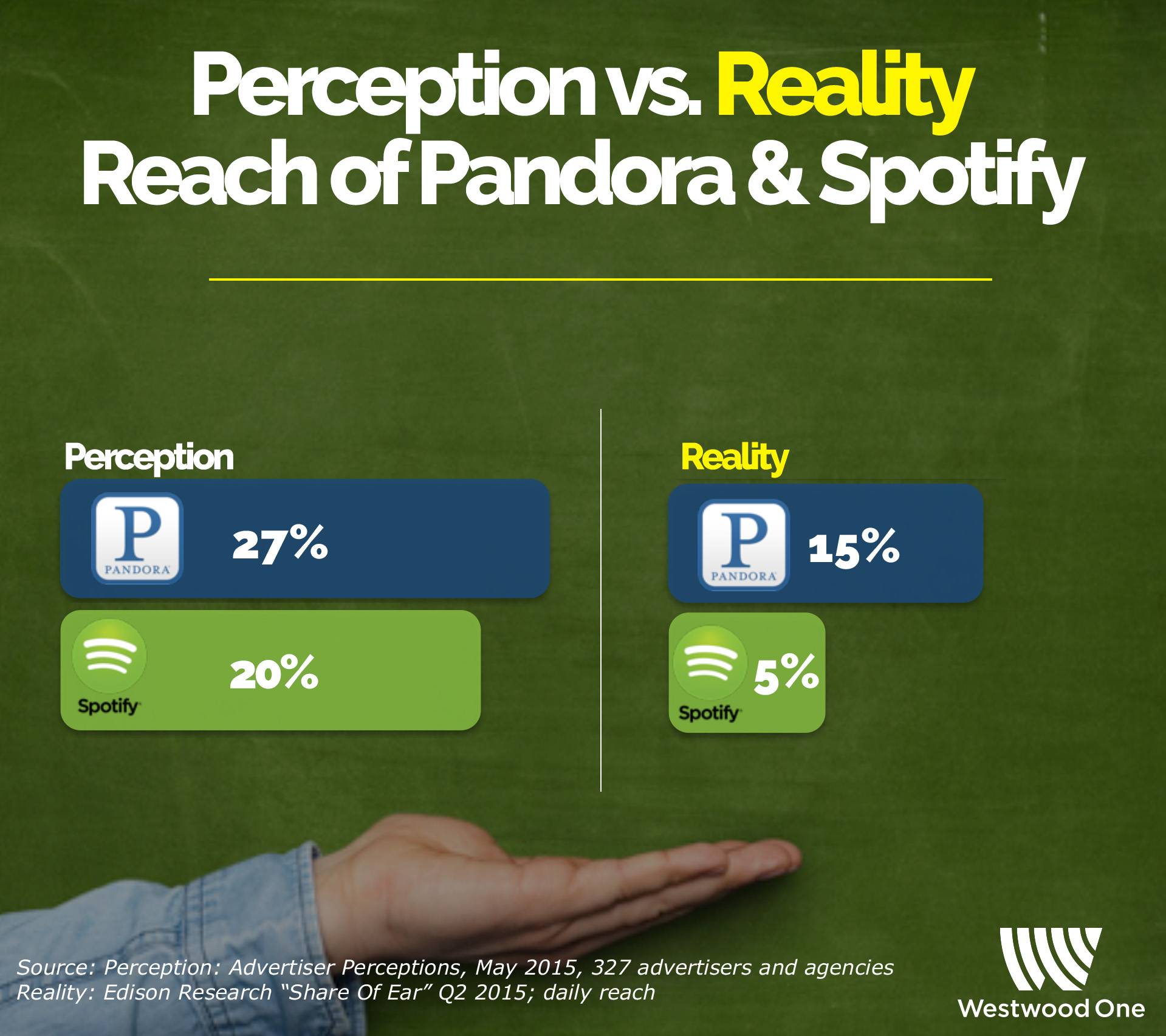 Americans love audio, and they want more of it.

At Westwood One/Cumulus, we are excited about streaming and the opportunity audio has to be available on new platforms. Just last week, we announced nearly 500 Cumulus radio stations will become part of the music streaming service Rdio, instantly creating broader access for our listeners and new opportunities for advertisers.

Andre Fernandez, President of CBS Radio, sums it up best:”Streaming has proven to be a popular platform, but not at the expense of radio’s growing total audience.”

In July 2015, researcher Mark Kassof polled Americans and found the consumer estimate of AM/FM radio reach was 53%. Talk about a perception gulf.

The American radio industry needs to spread the reality of our amazing reach to our very own listeners. After all, a lot of advertisers listen, too.

Last week was quite a study in media contrasts.

Yet, in the same week, Nielsen shocked with news that AM/FM’s reach continues to surge. “This quarter we find that the broad national radio audience (those 12 or older) has hit an all-time high for the second year in a row: 245 million Americans are using radio in a given week.”

“As a marketer, I’ve always found radio to be a medium that effectively and efficiently delivers reach over an extended period of time, while driving ROI within the total communications plan. But radio has been too low profile with brands, especially in light of other advancements in technology. Radio needs to be more aggressively marketing their story as the leading mass reach media.”

The American radio industry must spread the reality of our amazing reach to the advertising community.

As Kassof concludes: “Radio’s reality is that it’s great at marketing clients’ goods and services, but has fallen short marketing itself.”

Starting today, we are sharing the truth about how many consumers are reached by the power of AM/FM radio.