How Radio Elevates Awareness For An Insurer’s Media Plan, And What It Means For All Marketers

American Family Insurance (AFI), a Madison, Wisconsin-based company, is in the thick of the competitive industry, and sought to break out of the clutter and grow business in several of its key markets. They partnered with Katz Media and Nielsen to understand radio’s impact on the media plan and how the campaign helped grow key AFI brand health measures.

Radio moved the needle for American Family Insurance. A recent in-depth study of an AFI campaign, completed by Nielsen, revealed that radio provided a significant, positive boost to the rest of AFI’s media strategy, creating a “halo effect” to extend the reach of other media components such as digital media and television. Radio also delivered AFI its hottest prospects — those consumers who said they are in the market to switch insurers.

Radio Boosts the Rest of the Media Plan

The most powerful finding in the Nielsen study is that radio in the media mix elevates awareness for all other advertising. AFI Prospects who were exposed to the radio campaign were also more likely to see or hear the company’s ads on other media platforms, particularly the digital media campaign. Those exposed to the radio ads were 300 percent more likely to have seen or heard AFI’s digital ads, and 100 percent more likely to have seen or heard the mobile advertising. This media “halo effect” was also extended to television, print, and out-of-home advertising. Take a look at the numbers: 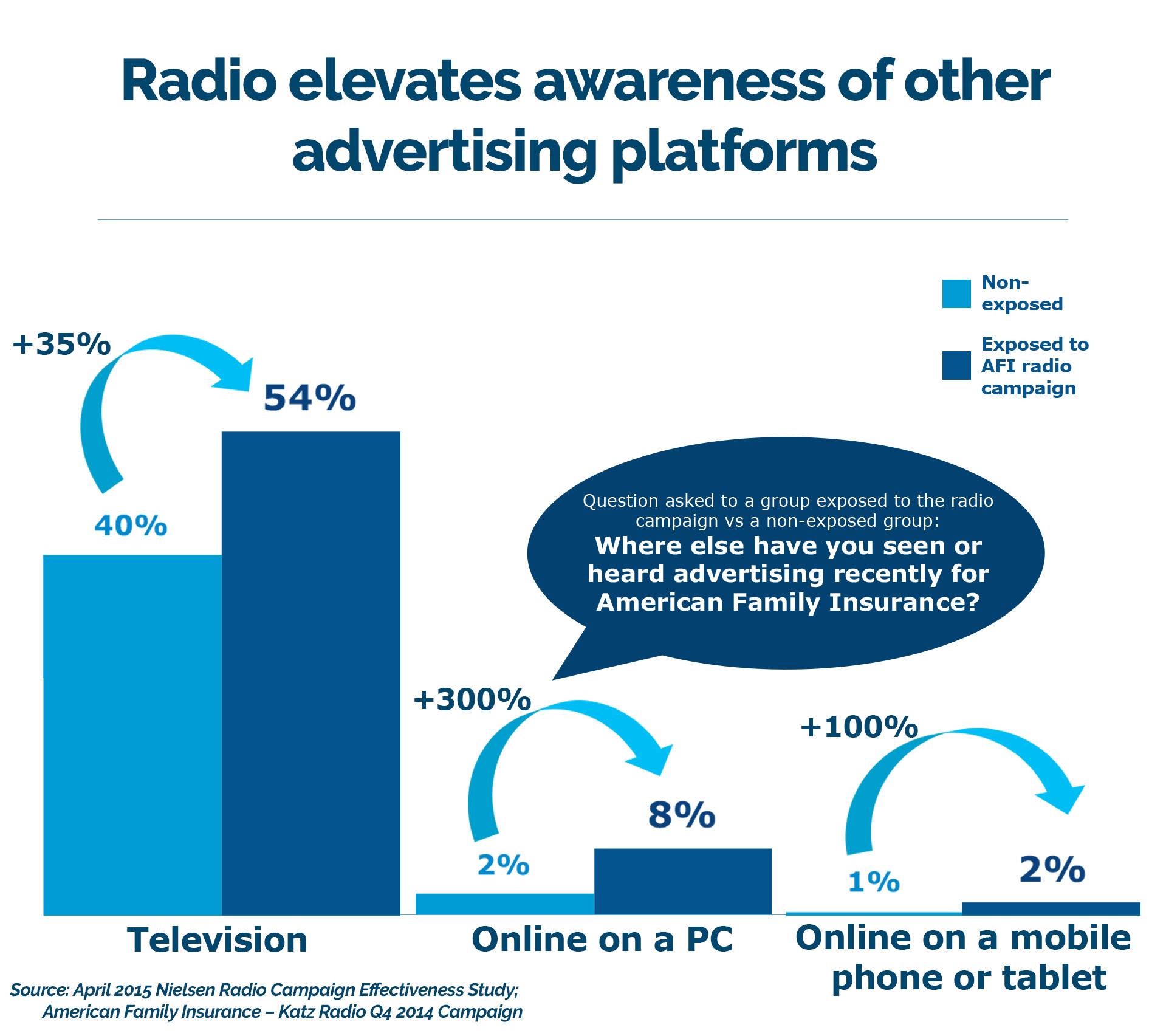 Radio added 22 percent brand lift for the pricing image. One-third (33 percent) of those who heard the AFI radio campaign said they felt the insurer “offers a competitive price on insurance,” versus 27 percent of those who were not exposed to the radio campaign.

Radio makes a measurable impact on brand awareness. Every marketer has key brand images they seek to grow. Radio is essential in getting these attributes communicated. 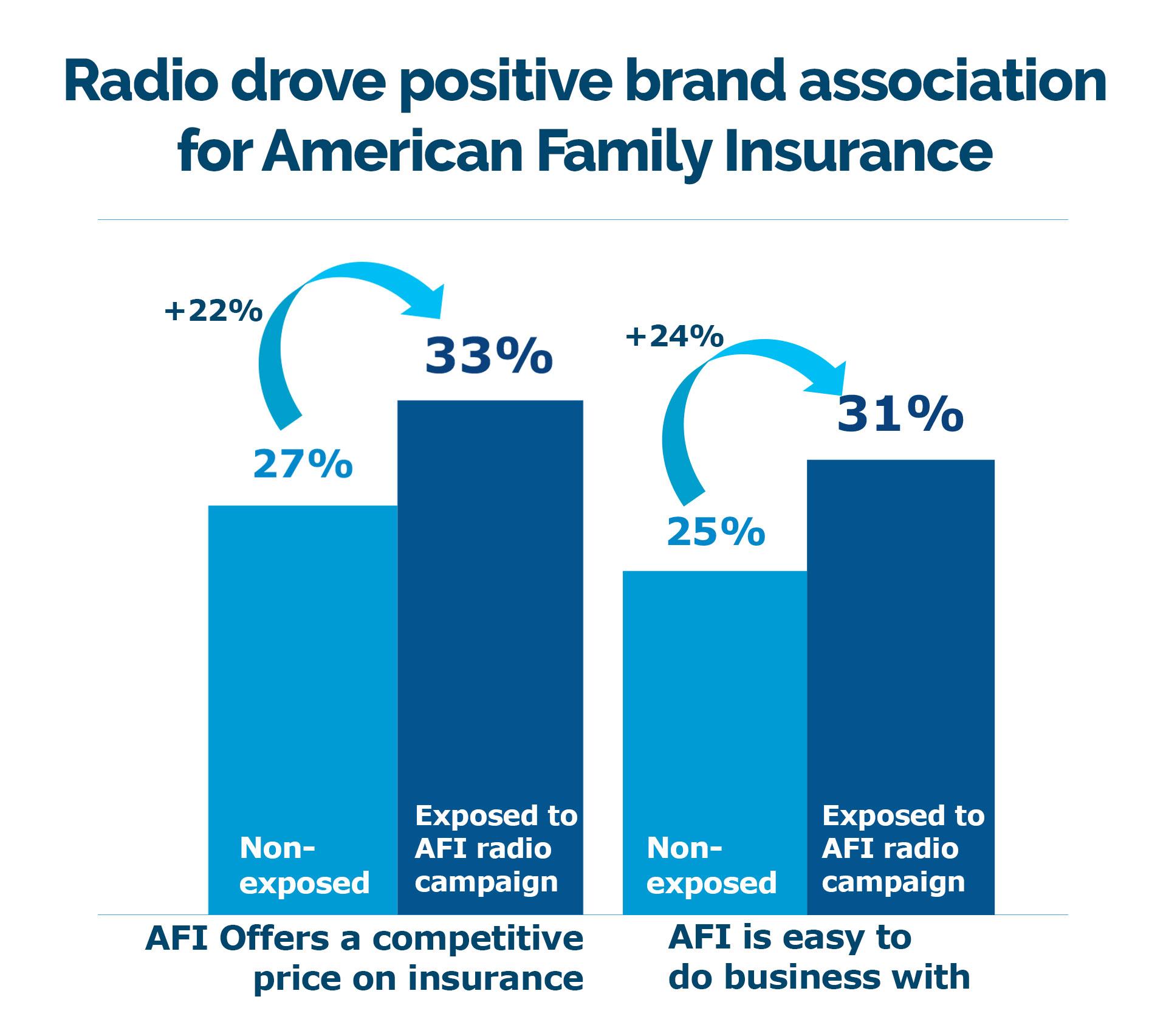 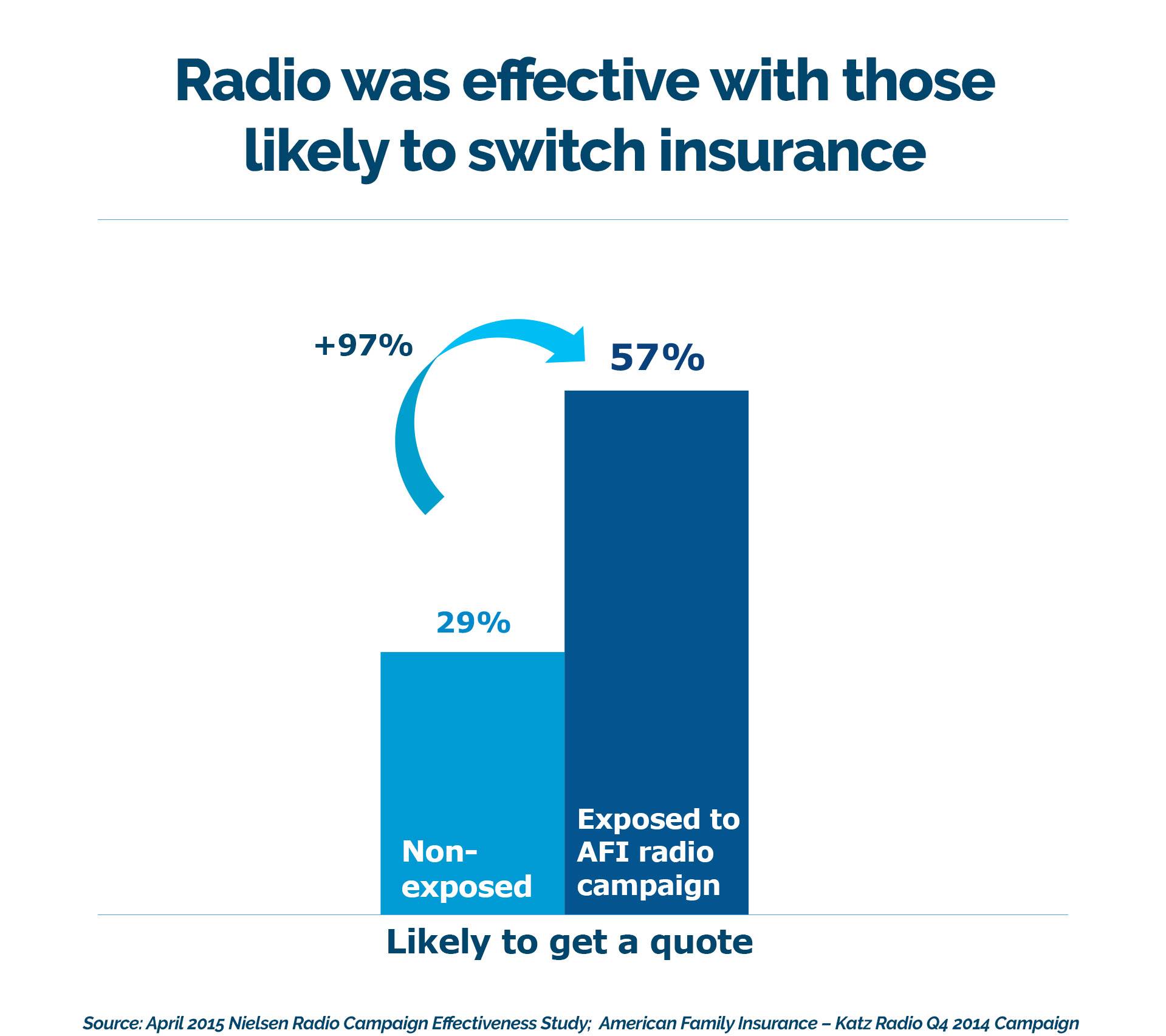 Tell Me About How You Boosted Your Brand Signal with Radio

American Family Insurance is one example from the insurance industry, but there are many more to be told. I encourage you to share yours by contacting me at pbouvard@westwoodone.com.

About the AFI Analysis

American Family Insurance partnered with Nielsen to measure the impact of radio advertising. The study compared people exposed to the radio campaign to a control group that had not heard the radio ads. The campaign occurred from 11/10/14-12/28/14. It targeted adults 25-54 in Atlanta; Denver-Boulder; Minneapolis-St. Paul; Phoenix; Portland, Oregon; and Seattle-Tacoma. The sample was decision makers for insurance ages 25-64.