In today’s digital world, there are more mobile app choices available to consumers than ever. Despite billions of dollars being spent in promoting these apps, it’s difficult for these companies to get noticed online.

The solution? Mass reach media like AM/FM radio. We partnered with Nielsen to conduct a campaign effect study for a major money transfer app to see how Westwood One’s NFL programming can be used to impact awareness and usage.

Here are the key findings from the study:

1. The NFL radio campaign boosted brand awareness and app usage. Overall, Nielsen saw that ads airing in Westwood One’s NFL programming generated a 26% increase in awareness for the app. While app downloads are important, app usage is even more significant. Exposure to the Westwood One NFL campaign caused a 21% increase in usage of the app overall. 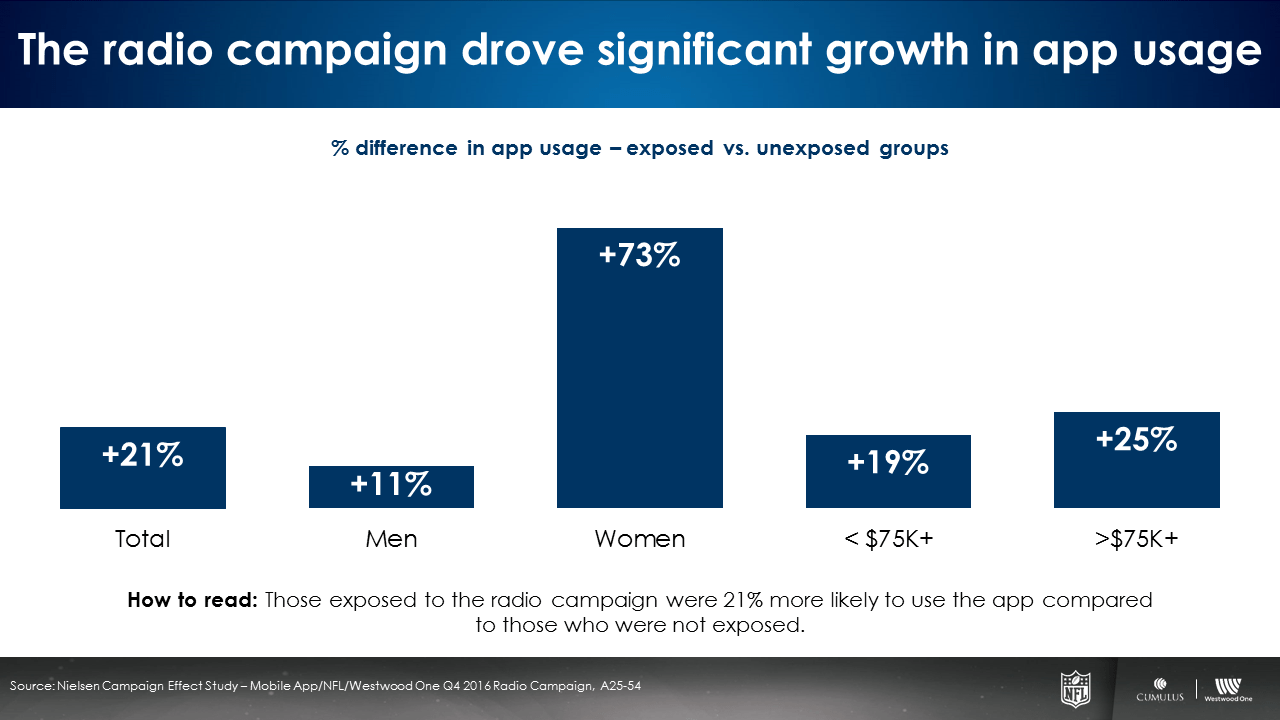 2. The NFL radio campaign was memorable, driving significant brand image increases. A powerful branding medium, Westwood One’s NFL coverage caused key image associations to grow. Those exposed to the radio campaign were 18% more likely to indicate that the mobile app company offered a “convenient transfer of money through its mobile app and website.” Images grew for trust (+9%) and leadership (+7%). 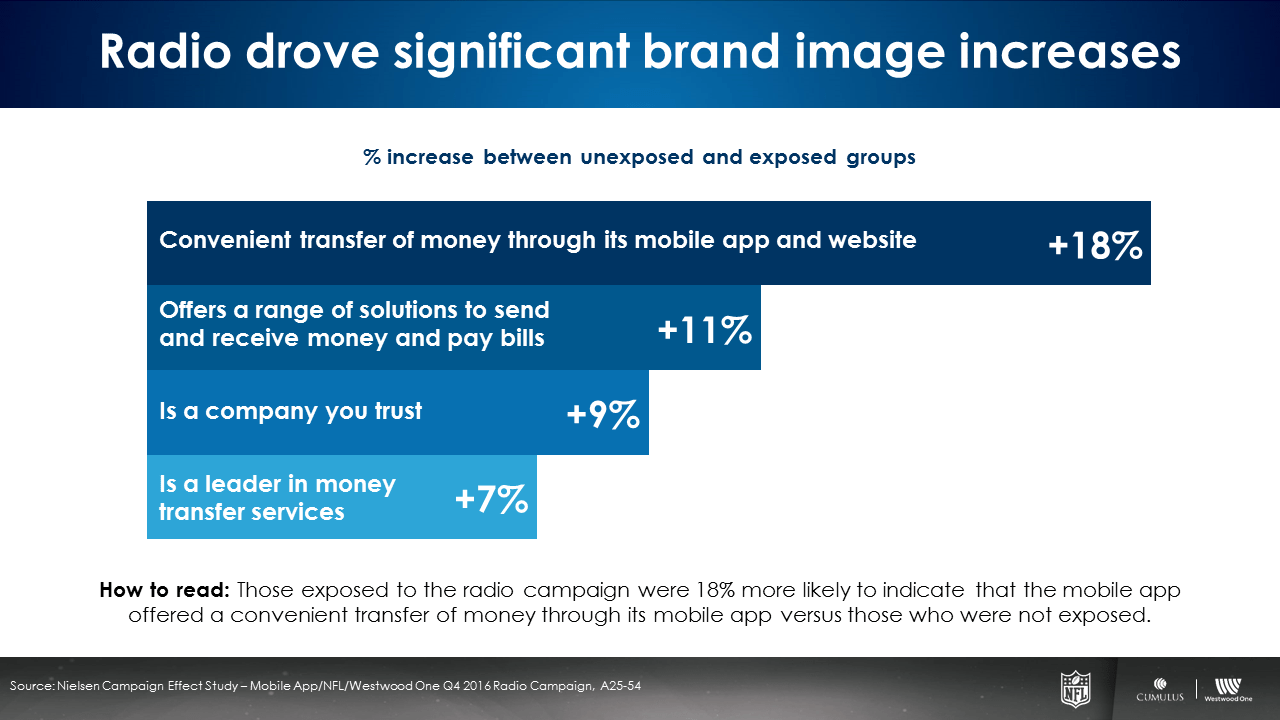 3. The NFL radio campaign boosted awareness of the entire media plan. Among those exposed to the ads airing during Westwood One’s NFL coverage, there was far greater advertising recall for all other elements of the campaign. For example, those who recalled the radio ad were 58% more likely to recall the digital campaign as well. 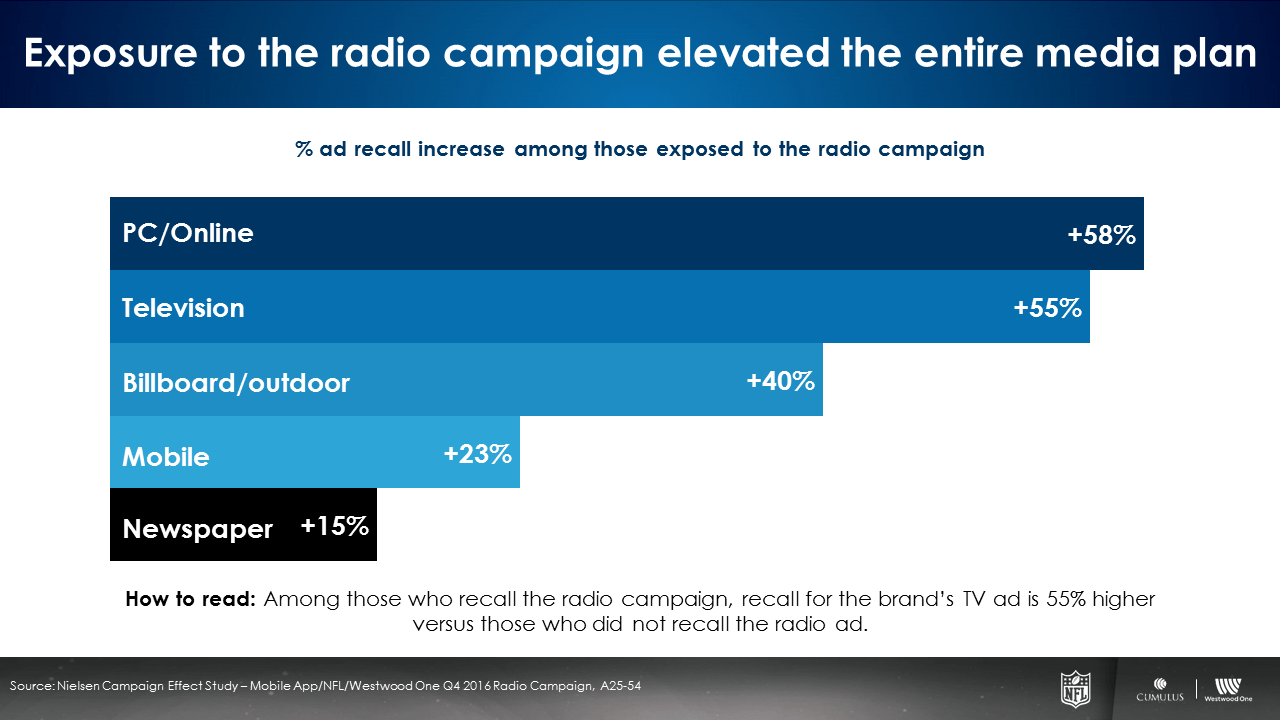 4. Radio ads voiced by play-by-play talent performed best. Nielsen tested the radio advertising against a number of ad creative measures. The creative favorability for ads voiced by radio talent tested off the charts, 60% better than the Nielsen radio creative average. Radio ads scored high in believability, being a source of new information, company uniqueness, and relevance.

Contact CorpMarketing@westwoodone.com or your Westwood One representative for more information about how to connect your brand to Westwood One’s NFL coverage.