The New York Times reports political strategists are turning to radio as a more effective way to reach voters. So far, Donald Trump’s campaign has only bought radio ads, and Hillary Clinton recently jumped into her first radio campaign.

Here are six reasons why political campaigns are turning to radio to sway voters.

1. Radio reaches an engaged and captive audience in the car.

According to The New York Times:

“Television viewers can tune out, and online audiences can scroll by or click ‘skip this ad.’ But radio listeners, stuck in their cars for long stretches, may be the closest thing to a captive audience for political commercials.”

One of radio’s main benefits over other media is the ability to reach a captive audience. Consumers can’t multi-task and are a more attentive audience when driving.

AM/FM radio is by far the number one way to reach people in the car — accounting for 72% of all in-vehicle audio listening. 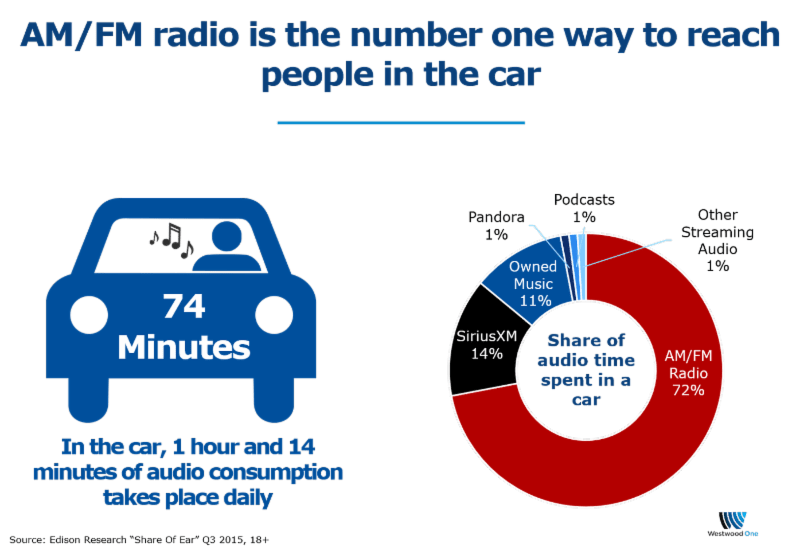 In fact, radio rules the day. Radio is number one in time spent among both 18- to 49-year-olds and 25- to 54-year-olds Monday to Friday 6AM to 7PM compared to television, smartphones, tablets, and other devices. 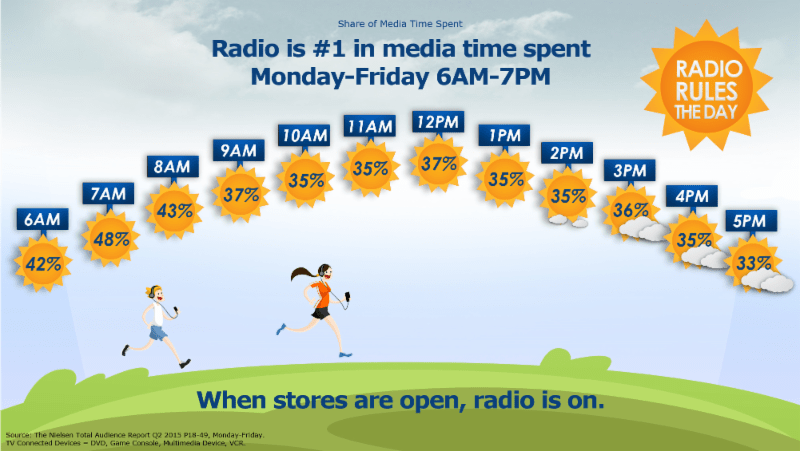 2. Radio is less cluttered than TV.

TV has an over-abundance of political ads voters tune out like wallpaper. According to The New York Times, campaign strategists say radio ads are more effective at getting a candidate’s message through to its intended audience.

Doug Watts, from Ben Carson’s campaign, has been advertising on radio since the summer in order to cut through the clutter of television.

“From December 15 through January, if you want to find a basket full of white noise, go to your Iowa TV set,” he tells The New York Times. “People are spending millions of dollars, and every other spot is going to be a political spot…You’ve got to find a way around that.”

Not only is radio a powerful reach vehicle, but it now offers sophisticated targeting capabilities to reach voters through new segmentation tools.

“Radio’s ability to meaningfully connect with the American electorate has been under-leveraged in the political advertising sector,” says Stacey Lynn Schulman, executive vice president of strategy and analytics at Katz Media Group. “Layering our listeners’ passions with Nielsen’s advanced political targeting provides candidates with an exciting new opportunity to engage voters in 2016.”

Here are the 10 Nielsen Voter Ratings segments and what percentage of the U.S. they represent: 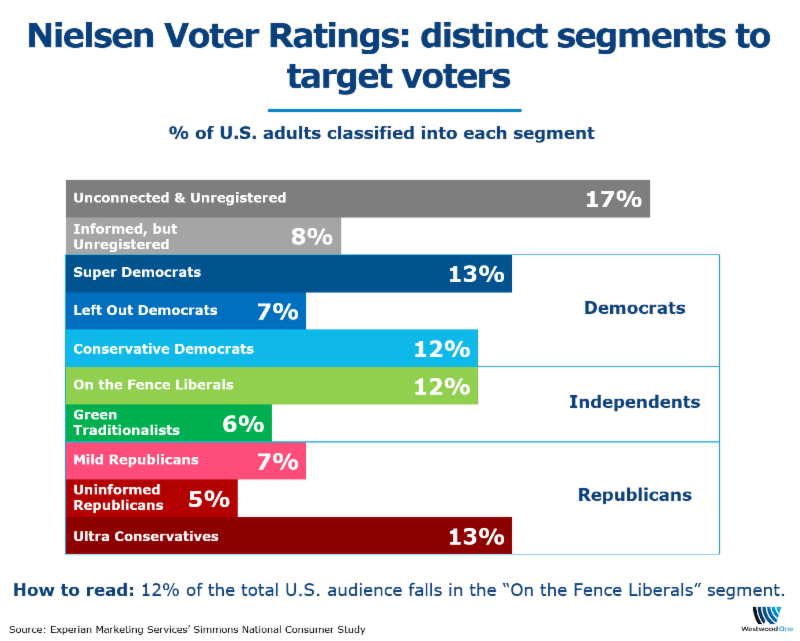 4. Radio reaches the most voters in America, including the 100 million Americans who do not watch local TV news.

You need mass reach for targeting. To reach the right target, you have to start with lots of reach. Using the new voter persona data, Nielsen found radio reaches 95% of Philadelphia voters across all 10 of the Nielsen Voter Ratings segments. 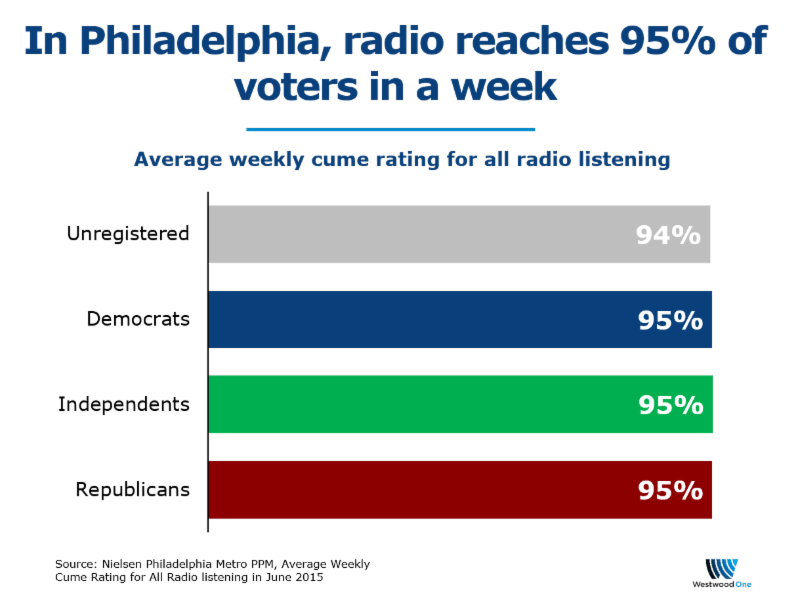 Radio’s mass reach can supplement television. According to Gfk MRI, there are 100 million Americans who do not watch local television news but do listen to radio. Adults who always vote in national elections and do not watch local TV are 35% more likely to trust radio the most. 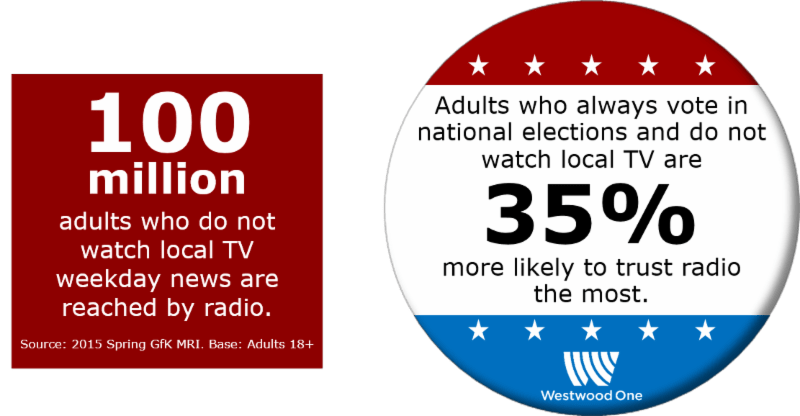 We used the Nielsen Voter Ratings tool to look at Cincinnati voters. In each voter segment, the majority of listening goes to music stations. There is variation in the proportion of music and spoken word depending on the voter segment.

For example, among “On the Fence Liberals,” 68% of the voter ratings go to music stations. 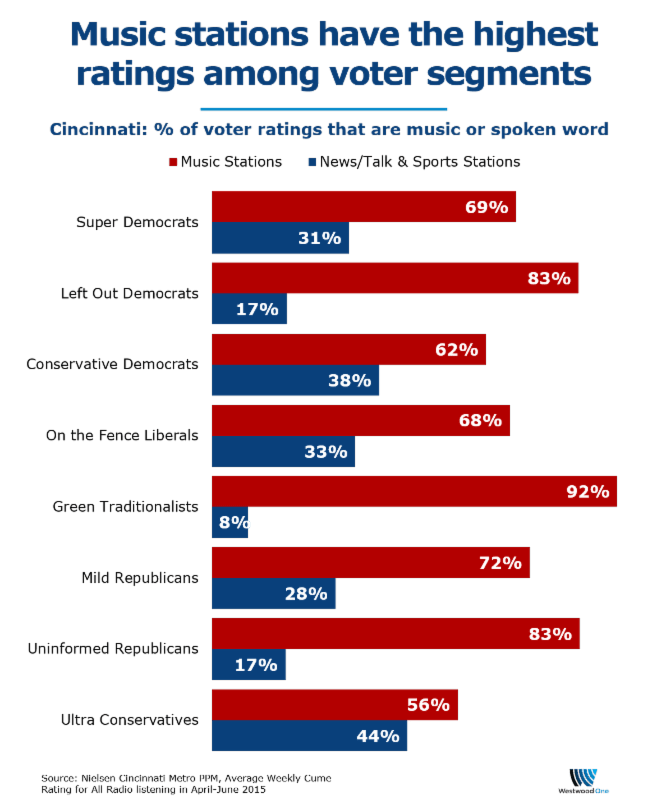 A typical television ad can cost 10 times as much as a radio ad, notes Larry McCarthy, the advertiser strategist for Right to Rise, a super PAC supporting Jeb Bush.

Campaign strategists are turning to radio because it works.

The Bernie Sanders campaign has bought radio ads in the four early states. Ted Devine, a senior adviser to the campaign, tells The New York Times there will be more to come. Radio is “a great closing tool” in reminding voters to get to the polls and what to have in mind when they make their decisions, he says.

Contact your local Cumulus Sales representative or activate@westwoodone.com to find out how to get your targeted political ads on the radio.