Are Radio Listeners The Engine Of E-commerce? A Look At Amazon Prime Day And E-commerce Upstart Jet.com

The New York Times said Jet.com represents “a frontal assault on Amazon … Jet’s promise is simple and … potentially momentous: to offer the absolute lowest price on just about everything.”

While these two events were very different — Amazon Prime Day was heavily advertised and Jet.com launched just with PR — there was one surprising common aspect: radio listeners.

Jet.com: Radio listeners showed up fastest to the game

What about Jet.com site visitation? 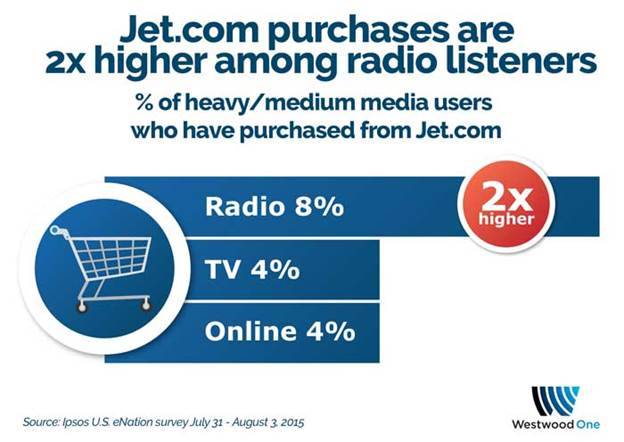 Up until this point, Jet.com had not advertised. Awareness and visitation occurred as a result of news media exposure and word of mouth. Compared to TV viewers and online users, radio listeners were more likely to be aware, have visited and made purchases at Jet.com.

Amazon advertised its Prime Day sale event on television, online and radio. According to another Ipsos study, radio was most effective at converting awareness into Prime Day Purchases! 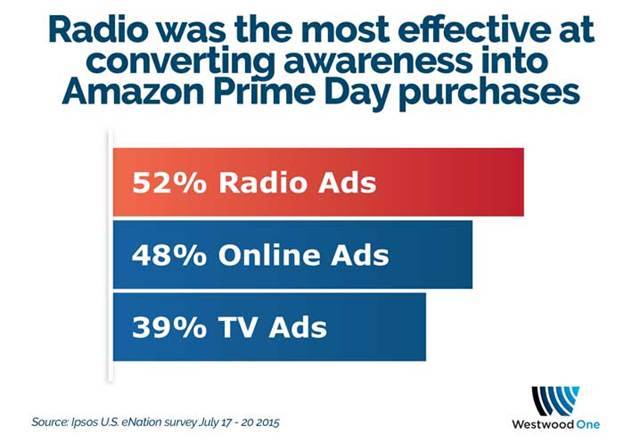 So what is it about radio listeners and e-commerce?

A new e-commerce site launches only with PR and radio listeners come flocking to Jet.com. Amazon advertises its Prime Day sales event, and radio has the highest conversion of awareness to purchase.

One explanation could be busy working persons with families. The profile of the e-commerce shopper and radio listener are a perfect match: working Americans with larger households and $50k+ income.

According to Nielsen, 77% of radio listening comes from people that work full- or part-time. Compared to heavy television viewers, radio has a much heavier concentration of working persons with families.

People who save time by shopping online are working and on the go – just like radio listeners. As the soundtrack of the American worker, radio is the engine to reach online shoppers.

How can radio help drive online sales for you?